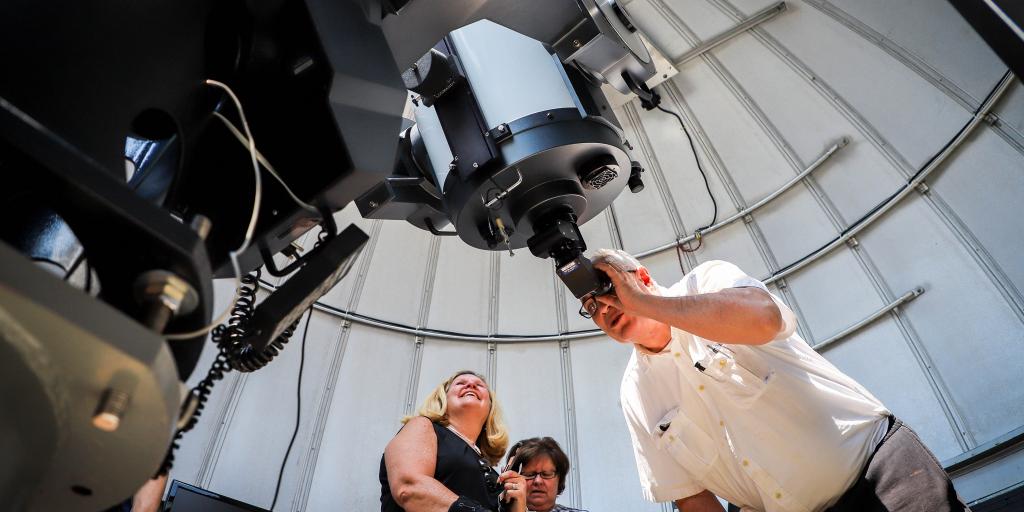 Before 1996, there was no Bradstreet Observatory, only a rooftop with a couple of piers attached to it. On clear nights, students, lab assistants, and professors would lug heavy telescopes to the piers and spend a good part of the night setting them up. Telescope alignment, focus, and balance are just the first few steps needed to observe the skies without permanently-mounted telescopes. Even picture-taking was much more complicated and serious research was out of the question.

The Bradstreet Observatory set out to change all that. This was a 20-year dream which came to fruition in 1996 after an eight-year, $450,000 fundraising campaign.

Two 14.5-foot diameter galvaluminum Ash Domes sit atop McInnis, a stone's throw away from the old telescope piers - a constant reminder of our humble beginnings. The domes can rotate 360 degrees with a shutter design that minimizes wind on cold days, and can be controlled from both the observatory deck or the climate-controlled control room.

The Earl G. Russell Sr. Control Room sits nestled between the two domes. Operators can see and control both telescopes/domes as information is fed into the hub of operations. Ken Goff of Performance Controls, a member of Eastern University's Board of Trustees, donated digital sensors to read out the domes' positioning, keeping the telescopes and domes in alignment with ease.

The workhorses of the Bradstreet Observatory are two 16" diameter Meade LX200 Schmidt-Cassegrain telescopes. The telescopes automatically track the night sky and keep objects in view with well-tuned motors. Computers within each telescope allow users to view 64,000 objects with the push of a few buttons.

In order to help streamline observing, the telescopes are attached to two state-of-the-art computers. Once linked to the main computers, the telescopes have access to a truly unbelievable amount of objects. The Sky6 software allows the telescopes to search for 19 million objects with an expandable database from the US Naval Observatory, pushing the number of searchable objects up to 526 million.

The true beauty of the Bradstreet Observatory is how user-friendly it is. One of the first of its kind, this observatory focused on non-major students and the public as its main clientele. Several computer programs, written by Dr. Bradstreet, help make observing straightforward. Such complexities as synchronizing the dome and telescope to one another happen in the background so that observers can focus on learning and working. Students are typically running the telescopes by themselves within 20-30 minutes. Looking back at the rooftop observation deck, things have come a very long way. In the old days, students would be hard pressed to have the telescope set up correctly in 40 minutes. Now students are taking pictures in the first 20 minutes.

Pictures are taken with a CCD (Charge Coupled Device) camera. The Bradstreet Observatory has two ST10-XME cameras, manufactured by the Santa Barbara Instrument Group. The cameras automatically guide the telescopes should the tracking falter. The cameras regularly send out a signal to correct the telescopes in order to keep the stars motionless for the exposure.

CCD cameras are far superior to film cameras in the astronomical world. Film is only about 8% efficient, and 92% of the light captured by a telescope is not even recorded! Our CCD cameras have between 60-85% efficiency at capturing the incident light. Such huge gains in light throughput make our relatively small telescopes as effective as much larger telescopes were in the 1960's.

In addition to the tremendous nighttime potential of taking pictures of celestial wonders, the Observatory can visually and photographically observe the Sun in great detail.  The Observatory is equipped with a video system that not only allows videotaping views through the telescopes, but also channels the views from the telescopes (or even the computer monitors) to any television set in McInnis Hall via closed circuit channels 5 and 11.

The Observatory has two solar filters.  The visual filter allows the surface features of the Sun to be easily seen; sunspots, faculae, and plages.  The Hydrogen-Alpha (Ha) filter hones in on a 0.5-angstrom (5.0 x 10-9 cm) bandwidth of the red line of hydrogen (Ha), allowing magnificent views of solar prominences, flares, filaments, sunspots, and granulation to be viewed or videotaped.

Research Capabilities Of The Bradstreet Observatory

The Observatory is well equipped to perform meaningful astronomical research.  We specialize in eclipsing binary stars, but can also monitor other variable stars, and search for new supernovae and asteroids.

We have an Optec SSP7 remotely-controlled, single channel photometer.  This device allows us to precisely analyze starlight via 16 different color filters and a very sensitive cooled Hamamatsu photoelectric photomultiplier.  The entire working of the photometer is controlled from within the Control Room via computer, and we (David Steelman and Dr. David Bradstreet) have written data acquisition software to control the photometer and display the observations graphically in real time.  This allows the observer to see exactly what the star is doing only moments after taking the data.

We possess an Optomechanics Model 10C spectrograph that allows us to produce excellent stellar spectra of a quality that will allow us to do research on brighter stars.  We have begun a project on Betelgeuse to monitor its spectral features to see if they vary in a systematic way corresponding to the star’s already varying light output.

The Bradstreet Observatory has two computers dedicated to data analysis: one using Windows and the other Linux (a Unix language for PCs). The Linux machine allows us to use the same reduction software that is used worldwide by the professional astronomical community.