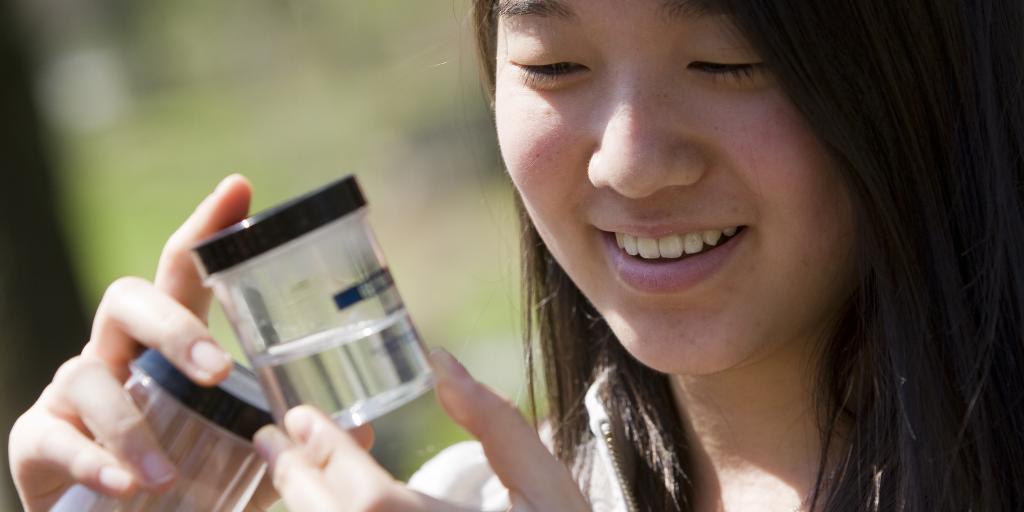 Eastern University’s facilities are well-utilized in its Biology Department courses.  Students gain expertise using a variety of field equipment and lab instrumentation.  The Main Campus of Eastern includes 115 acres with three lakes, wetlands and forest ecosystems which we use as a natural laboratory.

Biology lab capabilities include: PCR, DNA and protein gel electrophoresis, and gene cloning.  Anatomy and physiology labs have hardware and software for data collection such as ECG and EMG.  Cell biology tools include fluorescent microscopes with video enhancement capabilities, and laminar flow hoods for cell culture.

Student research labs: for independent research projects in the areas of cellular and molecular biology, virology, parasitology, and environmental science.

Kinesiology Lab: Capabilities include exercise science laboratory and AT facilities

Eastern University’s picturesque campus is the perfect place for college students to live and study, with on-campus residence halls, the Warner library, multiple study rooms, the recently renovated McInnis Learning Center, and state-of-the-art classrooms. The Warner Memorial Library provides students with access to 65,000 periodical titles in paper and electronic format, 870,000+ microform items, and over 60,000 full text ejournals, including the most current and popular biology journals and resources. The Biology Department is located in the center of campus in McInnis Hall.

Diverse Ecosystems:  Off-campus, we have access to a rich array of diverse ecosystems used as part of field biology courses. We are within two hours of resources such as: Atlantic Ocean barrier islands, salt marshes and bird migration stopovers like Island Beach State Park and Bombay Hook NWR; canoeing and hiking in the biologically unique New Jersey Pine Barrens at Wharton State Forest, the Appalachian Mountains, the Delaware Water Gap, and the Pocono Plateau, which includes special habitats such as glacial bogs.  Eastern University also has a GIS site license for ecosystem mapping and analysis, an important part of some course assignments.

Diverse Geology:  The immediate Philadelphia area includes diverse geology which influences what plants can grow.  Examples of this include serpentine barrens found near Eastern’s campus at the Tyler Arboretum; the transition from ancient, extremely hard bedrock of Philadelphia’s Piedmont as illustrated by the Wissahickon Gorge; a whitewater river within the city; and the limestone rift valley just north of Philadelphia as seen in the old growth forest at Camp Woods.

Tidal Effects & Wetlands:  Tides affect the Delaware River through Philadelphia, reaching out through Trenton, NJ. Tidal effects in a natural wetland can be studied in South Philadelphia at the John Heinz National Wildlife Refuge at Tinicum.  This location includes an unusual freshwater tidal marsh which serves as an important stopover for thousands of migrating birds, and is located just 30 minutes from Eastern University’s campus.

Urban Gardens & Arboreta:  In addition to observing effects of urban ecology on natural areas in the city like the Wissahickon Gorge, Philadelphia supports numerous urban garden programs such as the Pennsylvania Horticulture Society’s Philadelphia Green initiative.  There are more than 25 arboreta within 15 minutes to an hour from Eastern University.  About one quarter of these are regularly used in class labs, including Longwood Gardens, Morris Arboretum, Tyler Arboretum, and Jenkins Arboretum, Some of our students and graduates have enjoyed internship or employment opportunities at these arboreta, among others.

Research Collections:  Biology and related majors visit research collections not open to the public at the Academy of Natural Sciences.  These students have also participated in internship experiences at the numerous nature-focused institutions and preserves in our area including the Philadelphia Zoo, Stroud Water Research Center, the John James Audubon Center, and Cape Henlopen State Park.  An unforgettable tour of historic medical research collections is on display at the College of Physicians of Philadelphia’s Mütter Museum, and is always popular with Biology students.

We are less than three hours (by car) from New York City, Baltimore, and Washington DC.  Trains provide a quicker alternative, running from Philadelphia on the half hour, and connecting to the excellent public transit networks in New York and Washington. Upper level classes include visits to general exhibits and research collections at the Smithsonian Institution, the New York Botanical Garden, and the National Aquarium in Baltimore.

Nestled in affluent Wayne, PA, Eastern University is in one of the top 10 college communities in the country (USA Today). There are 40 colleges in the Philadelphia and Philadelphia suburbs, 25% of which are on the Main Line. Eastern students can take advantage of Wayne’s small, walkable downtown, which is lined with local cafes, stores, and businesses.

Eastern University is situated just outside the major, historic urban metropolis of Philadelphia, a diverse city which provides all the benefits of a major urban center and unique learning and living opportunities for students. Eastern students can take the train from the St. Davids station (located adjacent to campus) and be in the city within 20-25 minutes.