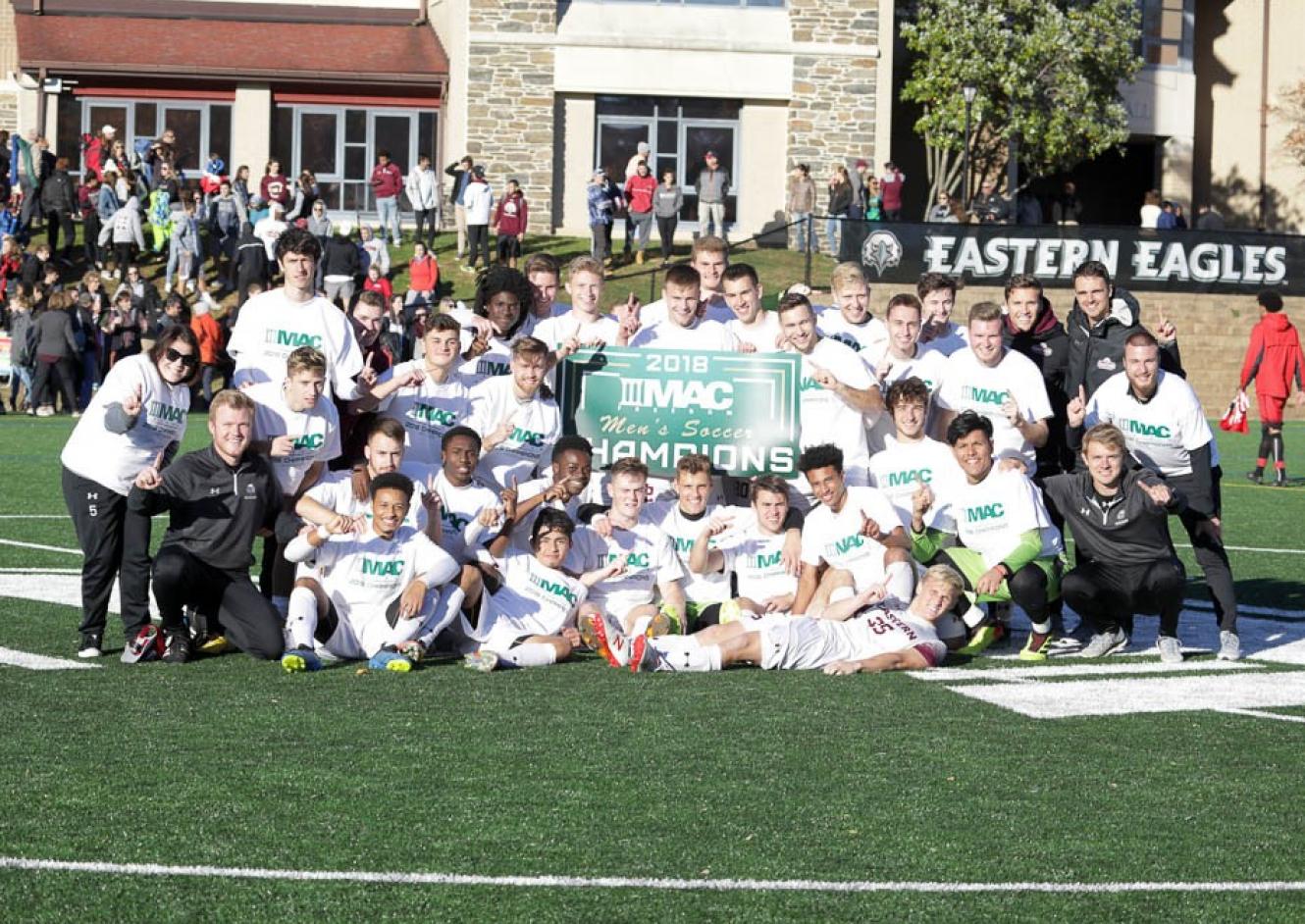 ST. DAVIDS, Pa.– On a day with a ferocious wind impacting play all over the field, Eastern University Men's Soccer took advantage of early opportunities and pulled away to a 3-0 win over the visiting and second-seeded King's College Monarchs (11-6-2). The Eagles became the first No. 1 seed to win the MAC Freedom Men's Soccer Title since 2010 and the first home team to win in the Championship match since 2012. Senior center back Jacob Myers had a goal and an assist and was named as the Championship MVP for the second time in his career.

How It Happened:
With wind gusting over 20 miles per hour through the afternoon, the teams knew that balls in the air could cause problems. The first ball of the day did just that. A misplay in the back gave the Eagles a throw in deep in Monarch territory in the opening minute. Billy Walenda heaved a ball toward the near post. Myers directed a header to the back post and Cade Harmon nodded it home for his third goal in the last three matches. HIs seventh goal of the year is the 27th of his career. Thirteen of those goals, including the one today, have stood as game-winners. Harmon scored the only goal in last Saturday's 1-0 home win over King's

With the wind not diminishing the Eagles needed to stretch the lead to provide cushion for the second half. The Eagles had several close chances, but King's goalkeeper Owen Geedy made four stops to keep the game at 1-0 for the first half hour. On one of those, a point-blank effort from Julio Ardon, Geedy seemed beaten, but somehow the senior backstop got his body on the ball and kept it out of the goal.

Harmon created the chance for the second goal. In the 31st minute, the senior forward tracked down a ball in the corner and faced his mark to dribble. After a quick move, Harmon earned space on his right foot and was ready to deliver a cross when he was fouled right at the edge of the area only a few yards from the endline.

Colin Furlong delivered a hard bending ball to the back post and Myers slid it home for a 2-0 lead. With the helper, Furlong now has 13 assists this season and 31 for his career. Myers, the Defensive Player of the Year in the MAC Freedom, is now tied for the league lead with nine goals. He also scored against King's in the Championship Match in 2015.

The Eagles had a golden opportunity to stretch the lead to 3-0 with a penalty kick in the 44th minute, but Jake Sankey's kick went high.

While the Eagles have not given up more than two goals in a match this year and have allowed two only three times, the 2-0 halftime lead still seemed tenuous. It seemed even more so when the Monarchs unloaded a barrage of serves into the Eastern box early in the second half. King's had three corners in the first five minutes of the second half. Dennis Cosgrove made the defensive play of the match with a brave header off the goal line on a shot from inside ten yards. The senior outside back stood his ground on the post and took the brunt of the shot to his face, but kept the ball out of the goal.

Following the initial barrage, the Eagles found their path on got the ball back on the ground. A strong run forward from Jake Cahill created a chance on the back post for Liam Harmon. Harmon's touch went wide, but the chance in the 53rd minute seemed to give the Eagles confidence that they could continue to hold possession.

That confidence reaped a reward at the hour mark. Cahill feathered a ball over the King's back row for Sam Sutherland in space on the right side. Sutherland spun a hard cross toward Cade Harmon on the near post. Harmon was in position to nod home his second of the day. A diving effort from a King's defender kept Harmon from the ball but also beat Geedy.

With a 3-0 lead, the Eagles still had defensive work to do, but the result seemed safe. In that, the home side held possession on the way to a 13th consecutive win.

Anthony Hitchcock made four saves to pick up his eighth shutout and 14th win.

Coach Payne Says:
"We are obviously very excited to win today. I never personally told the team this, but my expectation this season was to go 9-0 against our conference opponents. It was great to get contribution from a lot of different players over the two playoff games"

"Getting an early goal was huge today. That really set the tone for the rest of the match. Withthe wind behind us, it was really important for us to get a second goal before half. We have talked about imposing our will on another team before. I thought we did that today. We were able to break our opponent in the second half. I was very proud of our team as we saw out a lot of the second half with possession rather than having to defend a lot."

"A big difference in the game was our ability to win and compete for second balls. We did a great job challenging for the first ball a lot today. When you do that, you put yourself in a really good position for those second balls."

"I thought a lot of guys had really great games today. It was great to see Cade score in his third straight game. Liam was dangerous yet again and our midfield as a whole was great. Colin, Matt Mitchell, Bryce Wahinya and Julio all had great games. At one point in the second half, we had the three freshmen in there together. Those guys have grown into important roles this year. they have also gained valuable experience alongside a good group of seniors.

"The back line as a whole was great. Jake Myers keeps finding a way to have an impact both in the back and in the attack. Hitchcock made a lot of good decisions today. Anthony was able to provide consistent distribution against the wind. It helped a lot with the territory battle in the second half."

"Overall, it is a great win for our program. It is awesome to get a shutout. Its very special to be able to win our third conference title in four years. We're excited about being back in the NCAA tournament. We will be ready and prepared to play whoever we draw on Monday."

Up Next:
The Eagles will learn the location of and their opponent for the NCAA Tournament on Monday. The Eagles entered the weekend as the fourth-ranked team in the Mid-Atlantic Region.