How does the prop you brought represent you?

This is a DreamBook that I created a year after I lost my older sister to cancer. It represents the goals I have for my own life, some for me, and some for Emilee. I recently rediscovered this book as a college senior, having not written in it since my senior year of high school. As I look into the unknown of the future, this book reminds me of the young girl who was inspired by her older sister’s faith and fight against cancer, a young girl who needed hope for her future. I still feel I need hope for my future today, as I am unsure of what the next step is and I still struggle with grief. However, I am reminded of what I have gone through and done to get where I am today, a graduating senior with a degree, a scholarship, and a 3.9 GPA.

How would you describe courage in one sentence?

I think people or the media often make courage synonymous with being fearless but I see courage as being comfortable in the fragility or chaos of life, where change is real and the future is uncertain.

How did getting your degree require courage?

I came into college still processing my grief and I had felt like my identity had been shattered from losing my sister. I did not know the new me, the me without my sister, and I had trouble separating the qualities of myself that were temporary due to shock and grief, and those that were long-term and were a result from what I experienced. Because of this, choosing my degree was difficult as I felt who I was becoming was ever-changing, and I struggled with clarity of what I wanted to do in my future as well as clarity of mind, as difficult dates passed and made writing papers and deadlines harder, where time spent away from family made me feel misunderstood. As I became more established at Eastern, making friends and growing close with my professors, I found the support, encouragement, and patience I needed to ultimately persevere and not let my past hardships decide my future.

How does your current job or career path require courage?

The study of Communications presents endless options and opportunities for the future, fitting into many different fields of study, offering paths to multiple occupations. Choosing this major takes courage because “the next step” is flexible, it is not laid out, it is unlike nursing or pre-med where the next step is medical school. This major is for people who are okay coloring outside the lines and doing the unexpected. It is also for people who are willing to be misunderstood, because there have been, and will probably continue to be, countless times when people ask me what Communications is and what can you do with it. To answer both, it is everything.

How we communicate, why we communicate, how to communicate effectively, and what this all says about who we are as a culture and a community and a people, that is what Communications is. And often, Communications gets into the topics that people like to avoid or not think about, like the treatment or rhetoric of people from different political parties, or the over-abundance of self-disclosure now acceptable on social media. We look into and ask questions about the messiness of life and people, and that alone takes courage.

How did EU help you become more courageous in your thinking and actions?

Eastern’s “Faith, Reason, Justice” mantra is something I experienced and learned about in the classroom, and it challenged and expanded my thinking and perspective. Eastern gave me the freedom and tools to grow and shape my faith. I loved that there was purposefully no church on Sundays, that I had the opportunity to go out and visit and try churches with the help and encouragement from peers and faculty. In the end, I found Circle of Hope, a church I ended up going to for half of my Eastern career that, equally with Eastern, shaped and marked my spiritual journey during my college years.

Eastern showed me that the key difference to doing good as a Christian is reason. We have a reason to reach out to others and demand justice and shake up the world’s priorities. Jesus wants each of us to know we have a role to play in His plan for reconciling the world back to His love and purpose. Eastern reminded me that justice without reason is not necessarily passionless, but it is pointless. This is because it does not open the doors to the impossibilities that God can make possible, to the power and change that can only come from the unexplainable, otherwise known as God at work.

The word “Justice” was unpacked at Eastern, and I found this to be an explanation I needed for my own life and for the world around me. I wanted the standard to be set, the reminder to be spread: this is what we call justice and that is how we do it. Now, I never got a clear answer for what justice is or looks like in the world as that was ultimately up to my own conclusions. But Eastern showed me that justice is an issue many find too overwhelming to address, and my professors discouraged this view. Justice was a need in the world, and we as students, as people, had the capability of bringing it about. I learned that approaching justice was multi-layered, that it included people-to-people contact where needs are directly fulfilled, advocacy and speaking out for legal changes, as well as creating spaces of inclusion where conversation, exchanges, and listening can all take place. Suddenly, justice wasn’t a lofty goal or a nice idea, it was real and possible and I saw that justice could very much be my future.

In short, Eastern University gave me the understanding and the confidence to see that I could make a difference.

Where do you hope courage will lead you in the future?

In a concrete answer, I hope courage leads me to writing a book someday. Or maybe two or three. In life, I hope courage takes me to places I never dreamt of going, to meeting people that further inspire courage and curiosity within me, to a place and a purpose that fulfills what God had in mind for me when He created me. 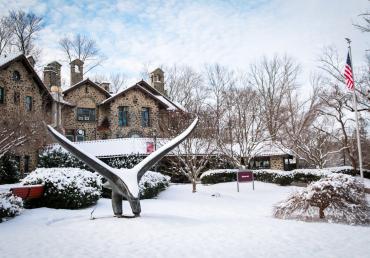