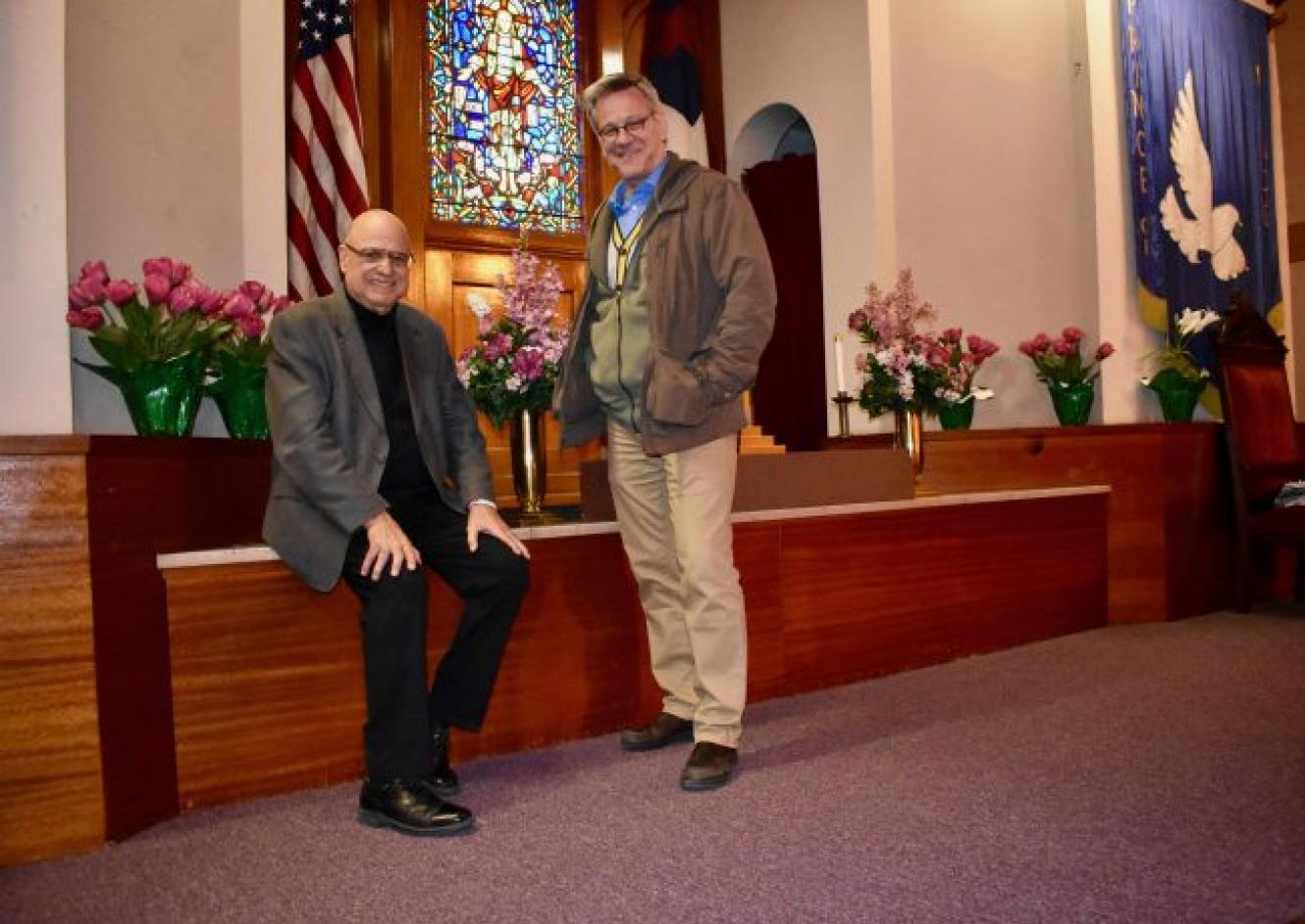 (Note: This article was originally published in the South Philly Review by journalist Grace Maiorano and has been shared with permission. View original article on southphillyreview.com.)

From developing universities in the Dominican Republic to advising microcredit programs in Indonesia, a pair of reverends bearing decades of global humanitarianism are bringing their benevolence to the corner of 13th and Tasker streets.

In efforts to resurrect a once-thriving congregation, the historic St. John’s Baptist Church, whose impact has also reached around the world, has turned toward two colossal religious and academic forces of Eastern University.

Along with the Rev. Dr. Lyndell D. Backues, an associate professor of economic development, prominent evangelical Baptist spiritual leader Tony Campolo is currently serving as one of the two interim pastors of the Passyunk Square parish until a new full-time leader is named who will be the fifth in the church’s more than century-old history.

After the Rev. David M. Powles completed his 29-year tenure at St. John’s in December, the Philadelphia Baptist Association reached out to Campolo, a professor emeritus of sociology at Eastern University and associate pastor at Mt. Carmel Baptist Church in West Philadelphia, to nurture the South Philly institution as it transitions into its next chapter.

As the church is grappling with diminishing attendance and finances, Campolo is calling for a fresh perspective, particularly considering the shifting demographics of the immediate community. Examining the task at hand, he asked Backues, a fellow Eastern University educator and East Passyunk Crossing resident who spent almost two decades performing missionary work in Indonesia, to parter him in the undertaking.

“When the phone call came, and I called Lindy, our response was – what a gift,” Campolo said. “What a gift this is to us…It would be one thing to go to a church which had 3,000 people out on a Sunday and a lot of money, and we can find those options easily, but, to be here is the privilege.”

For the 83-year-old Campolo, whose accomplishments include creating the internationally renowned Evangelical Association for the Promotion of Education, leading the progressive Christian movement Red Letter Christians and counseling President Bill Clinton during the Monica Lewinsky incident, to name a few, supporting this South Philadelphia church, he says, is part of his lifelong mission.

“A chance to connect with a church that is so much a part of my life,” he said. “I mean, it’s like the circle comes around…The way I want to end my ministry is where it all began.”

Campolo’s father, an immigrant from Sicily, and his mother, who was born in South Philly to Italian immigrants, were both baptized at St. John’s roughly a century ago.

During a time when Italian immigrants were viewed as second-class citizens, Campolo says the church, where his parents met during a youth fellowship program, welcomed them with open arms and even assisted them in finding jobs.

In fostering the church’s new vision, the details of which, Campolo and Backues stress, will gradually arise from parishioners, a cornerstone concept is reprising St. John’s role as a safe haven for immigrants.

“That’s what built these churches in those days – their reaching out to meet the needs of the poor and the needy,” Campolo said. “It’s a new time. New generation. New ethnic groups.”

Though few they might be, the church is already comprised of a diverse group of members, including Italian-Americans, African-Americans, Indonesians, Hispanics and Haitians.

“These people won’t stay unless they’re feeling welcomed,” Backues said. “So, they’re doing something right. And we didn’t do this. We came here and discovered this. We didn’t convince them to do this. There’s something about this.”

But, for Campolo and Backues, in order to increase the congregation, they recognize a need to maximize this embrace toward the influx of new demographics migrating into nearby neighborhoods. A major part of this task includes connecting with local ethnic organizations, nonprofits and churches of all faiths, stretching St. John’s tentacles across South Philadelphia.

Backues, whose work in Southeast Asia included founding a “multidisciplinary, multi-faith community empowerment, non-government” organization and serving as a program supervisor for response to the 2004 Indian Ocean tsunami, settled in South Philly after moving back to the United States 10 years ago.

Settling here, Backues, who holds masters of divinity in biblical studies and anthropology, a master of science in economic development and a Ph.D. in theology and economic development, channeled his global development skills to networking with local immigrant organizations, including the Indonesian Diaspora Network of Greater Philadelphia. He also founded the South Philly-based Taproot Gap Year Program, which sends college students on academic and faith-based journeys to communities in Yogyakarta, Indonesia.

Backues hopes to use these local resources, including his contacts with local Mennonite,  Muslims and minority institutions to connect individuals of every walk of life through the presence of St. John’s.

“We want to be a service to the community,” Backues said.. “We want it to maintain the sacred space….this is a church, and we worship Jesus, but we worship the Jesus who talked to everybody. We worshipped the Jesus who embraced people that other people wouldn’t embrace.”

Although officially concluding in 2014, the 40-year Evangelical Association for the Promotion of Education, which through numerous ministries, reached communities from Camden to Haiti with services from AIDS hospices to literacy centers, one of its existing organizations, Mission Year, will play a part in St. John’s renewal.

Campolo says that starting in September, Mission Year, whose purpose is to “develop lifelong disciples, leaders and advocates who will transform the church, the city, and the world,” will send at least five young people from all over the country to live in the South Philly neighborhood where they will conduct missionary work.

Campolo also intends for St. John’s to serve as the focal point for a new urban initiative program starting at Eastern University that will serve refugees.

Although they have these and other concepts in mind, including a youth summer program, Campolo and Backues emphasize that the re-imagination of St. John’s ultimately rests in the hands of the people.

Provisions will surface as the co-pastors immerse themselves in the parish, learning the needs of the neighborhood firsthand.

“We’re very, very desirous of allowing the people in the community to define what we do,” Campolo said. “We are not coming in to impose a program from the outside…the ideas are emerging from the people.”

Although looking ahead, the tandem is concurrently perusing through the church’s archives, seeking inspiration from St. John’s annals of multiculturalism as it prepares for its next phase of inclusion.

During the mid-20th century, the Rev. Anthony Vasquez, who became the third pastor of St. John’s in 1953, led his congregation on a worldwide quest to research foreign countries and properly honor them in his church. According to history outlined on St. John’s website, Vasquez wrote to nations asking for a flag and a letter from the then-Head of States. And in February 1956, the church was dedicated as a “A House of Prayer for All People” – a magnificent inscription that still stands in the back of the church. 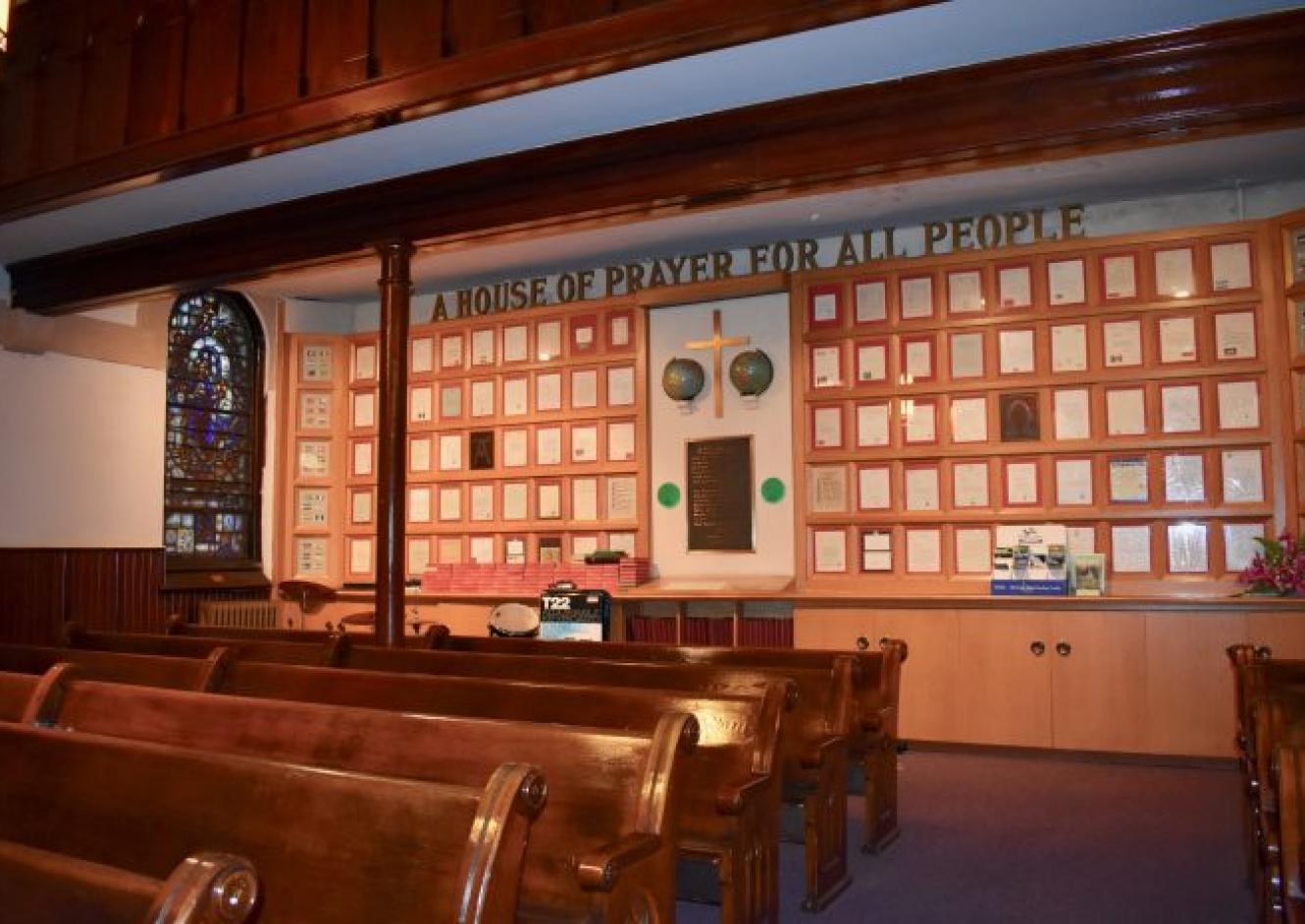 In the rear St. John’s sanctuary, approximately 90 documents signed by various diplomats line the back wall, encompassing letters addressed to Rev. Vasquez during the mid-20th century from countries around the world. (GRACE MAIORANO/South Philly Review)

In the rear of St. John’s sanctuary, approximately 90 documents signed by various diplomats still line the back wall, encompassing letters addressed to Vasquez from countries ranging from New Zealand to Swaziland.

“President Katzir has asked me to tell you how heartening he found your account of the international character of the House of Prayer,”  reads a letter written to Vasquez from the assistant of Israeli president Ephraim Katzir dated Dec. 8, 1974. “…It is Israel’s hope that, despite dark clouds of the moment, the understanding of men of good will like yourself, will enable it to give shelter to its persecuted brethren, to build a noble society and contribute to the peace of the Middle East and the world.”

These ideals echo in Campolo and Backues’s intentions.

“If we can get this going, it’s not our vision. It’s Dr. Vasquez’s vision,” Backues said. “This is what he wanted.”

Currently, both co-pastors will be preaching during Sunday sermons at 10:30 a.m. Backues will occasionally preach alone, as Campolo is scheduled for speaking engagements across the country and world on certain Sundays over the next few months.

Although co-pastoring for only a month, the reverends say they’ve been responding well with the parishioners.

“Both of them are very dedicated men,” said Margie Domard, secretary of the church. “They’re balls of fire – both of them…they’re very inspiring.”

Currently, there is not a date set as to when a new full-time pastor will be named, so the duration of the co-pastors’ occupancy is undetermined.

And although both Campolo and Backues are bringing with them decades of extensive experiences collected in countries, classrooms and churches across the world, they humbly recognize their limits.

This article was originally published in the South Philly Review by journalist Grace Maiorano and has been shared with permission. View original article on southphillyreview.com.