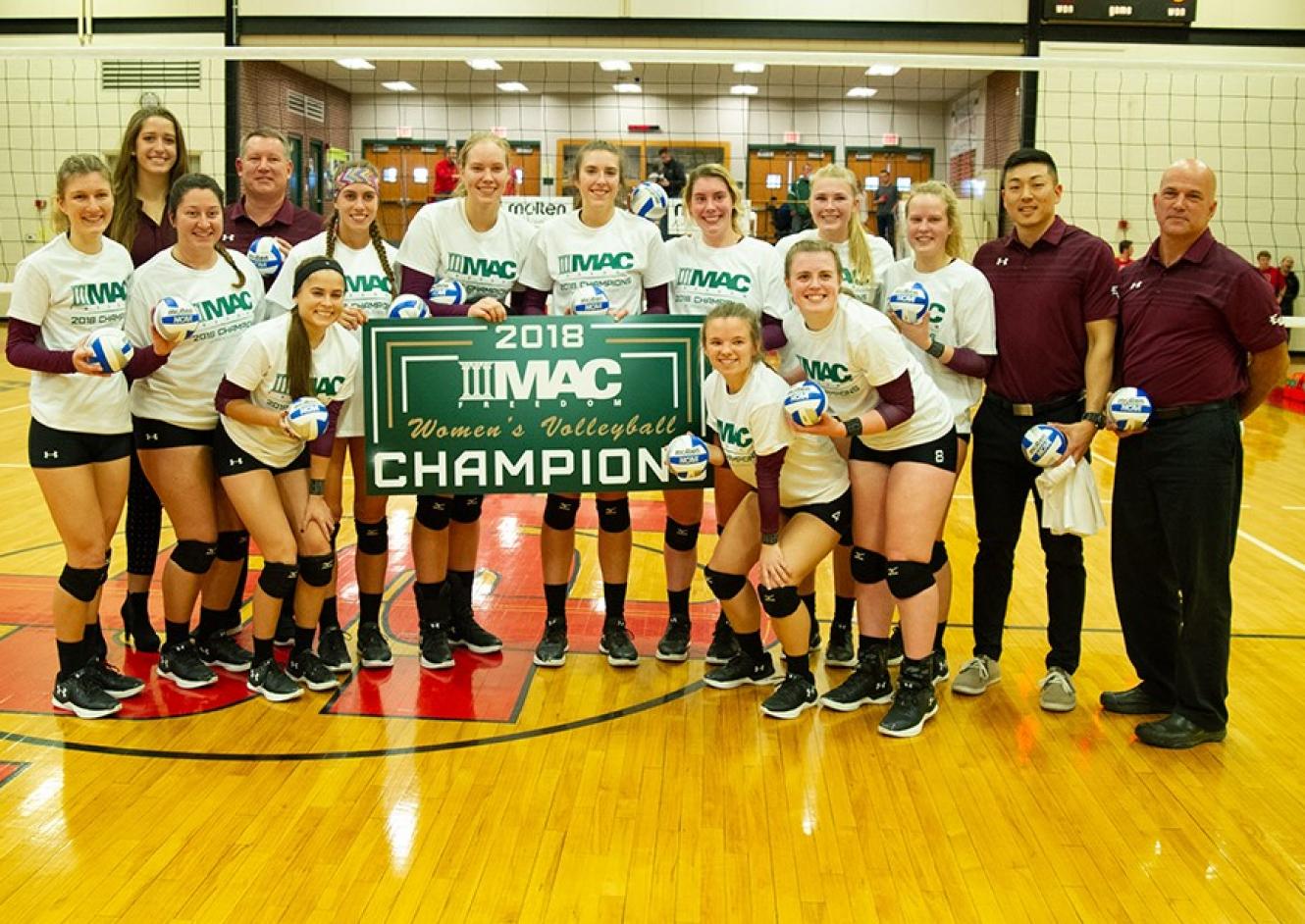 CENTER VALLEY, Pa. – Eastern University Volleyball set a good tone early and held off top-seeded DeSales to claim the program's eleventh-consecutive MAC Freedom Championship with a 3-1 road win. Michelle Paulsen had 12 kills and three blocks while hitting .545. She was named as the Championship MVP.

How It Happened:
Playing on the road for the final in the second year in a row, the Eastern team knew that they would be playing in front of a vocal crowd.

The Eagles jumped out to a great start to calm the host crowd a bit. The Eagles hit .500 with 18 kills on the way to a 25-14 opening set win. Caroline Shelby and Sammy Rogers each had six kills and Paulsen had five on only seven swings. The Bulldogs scored three points on sere early to tie the set at 6-6, but the Eagles were perfect on their sideout chances to close out the set. Katie Stenby served the last four points of the set.

The Bulldogs bit back with a strong start to the second set. The Eagles were unable to score on serve and each of the first seven DeSales servers were able to score at least one point on the way toa  16-7 lead. The Eagles generated a few points, but DeSales still held a 21-13 lead and looked to be cruising to an easy win. The Eagles scored four points with Lindsey Heisey at the service line to force a Bulldog timeout at 21-18. Eastern eventually tied the set at 23 before DeSales finished with a sideout and a point on sere.

The momentum gained at the end of a dropped set proved to be helpful.

Eastern built a 6-1 lead in the third and kept the edge at at least five points through the set. The Eagles were able to sideout on 14 -of-19 opportunities in the frame. Shelby led the Eastern attack with eight kills in the frame. Kline dished out nine assists and recorded eight digs to keep points alive.

While the Eagles never trailed in the fourth set, the lead never seemed safe until Stenby served four points in a row for a 22-17 lead. The junior defensive specialist start the run with an ace. Shelby the put away a kill before combining with Sarah Roberts on a block. Roberts finished the run with a kill on an overpass. The teams traded sideouts until Kline served the final point for a 25-19 win. Paulsen delivered the final kill.

Eastern and DeSales have met in the last eight MAC Freedom Championship matches and ten-of-11 since Eastern joined the MAC Freedom in 2008.

Coach Birtwistle Says:
"I am so proud of the way the girls played as a team today. Several individuals had their best matches of the year.  That is what we needed to beat a solid DeSales team."

"Our middles were good again today but it was really the outstanding job Caroline and Sammy did today on the pin that proved the difference. Not only were they scoring in system, but they made good choices and we scored when we got out of system as well. I am really proud of both of them for how far they've come this year."

"The hitters were effective today because our defense and passers did an excellent job. Cecilia led the defense with 23 digs and was solid in our serve receive. Morgan, Katie, and Caroline all had double-digit digs as well.

"I am really excited for Michelle to receive the MVP.  She has had the best season of her career. Today she needed her teammates, and they all got the job done."

Up Next:
The Eagles have secured a bid to the NCAA Tournament for the 21st time in the last 22 years. They will learn the location of the Regional and their draw, when that is announced by the NCAA later this weekend.