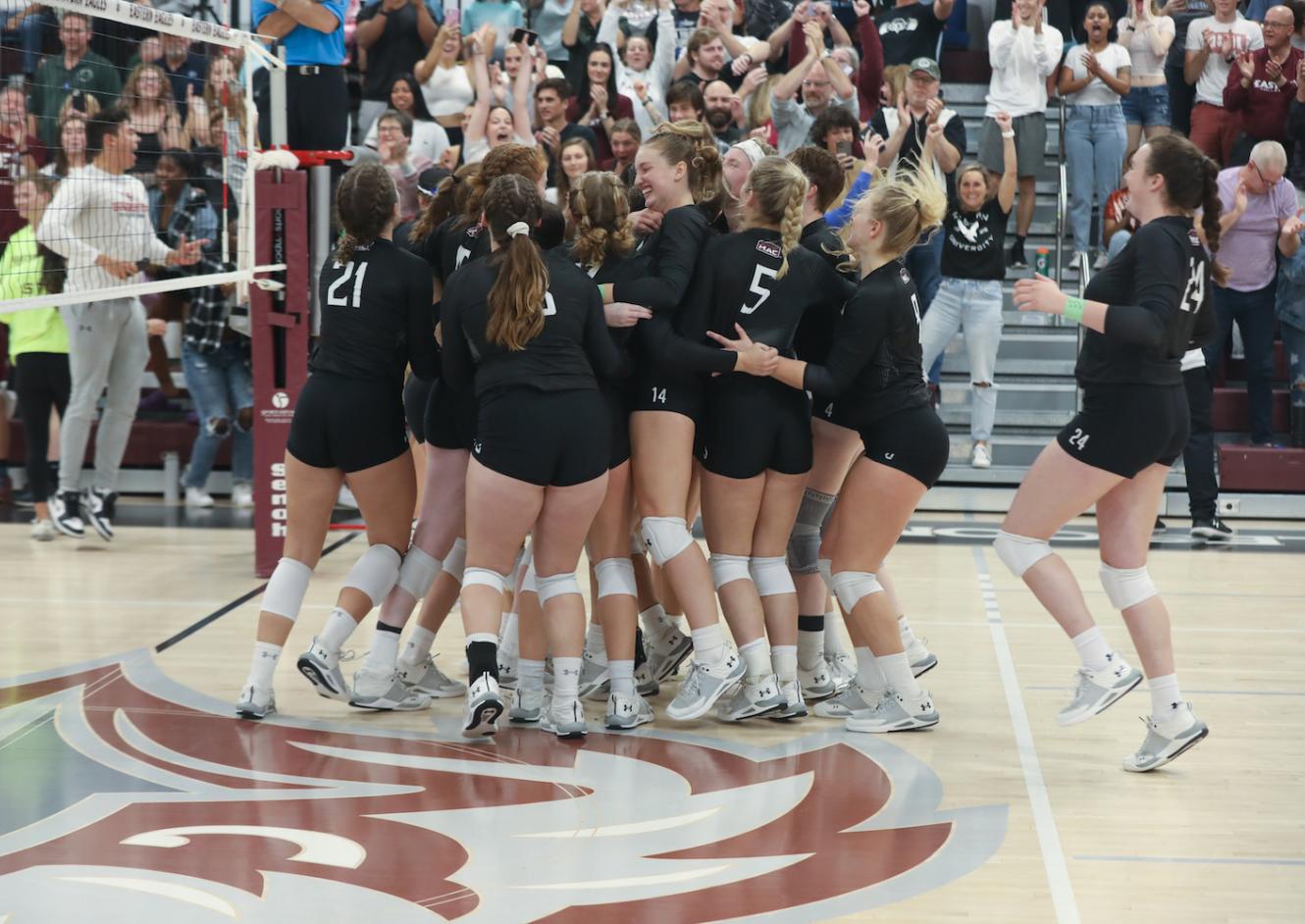 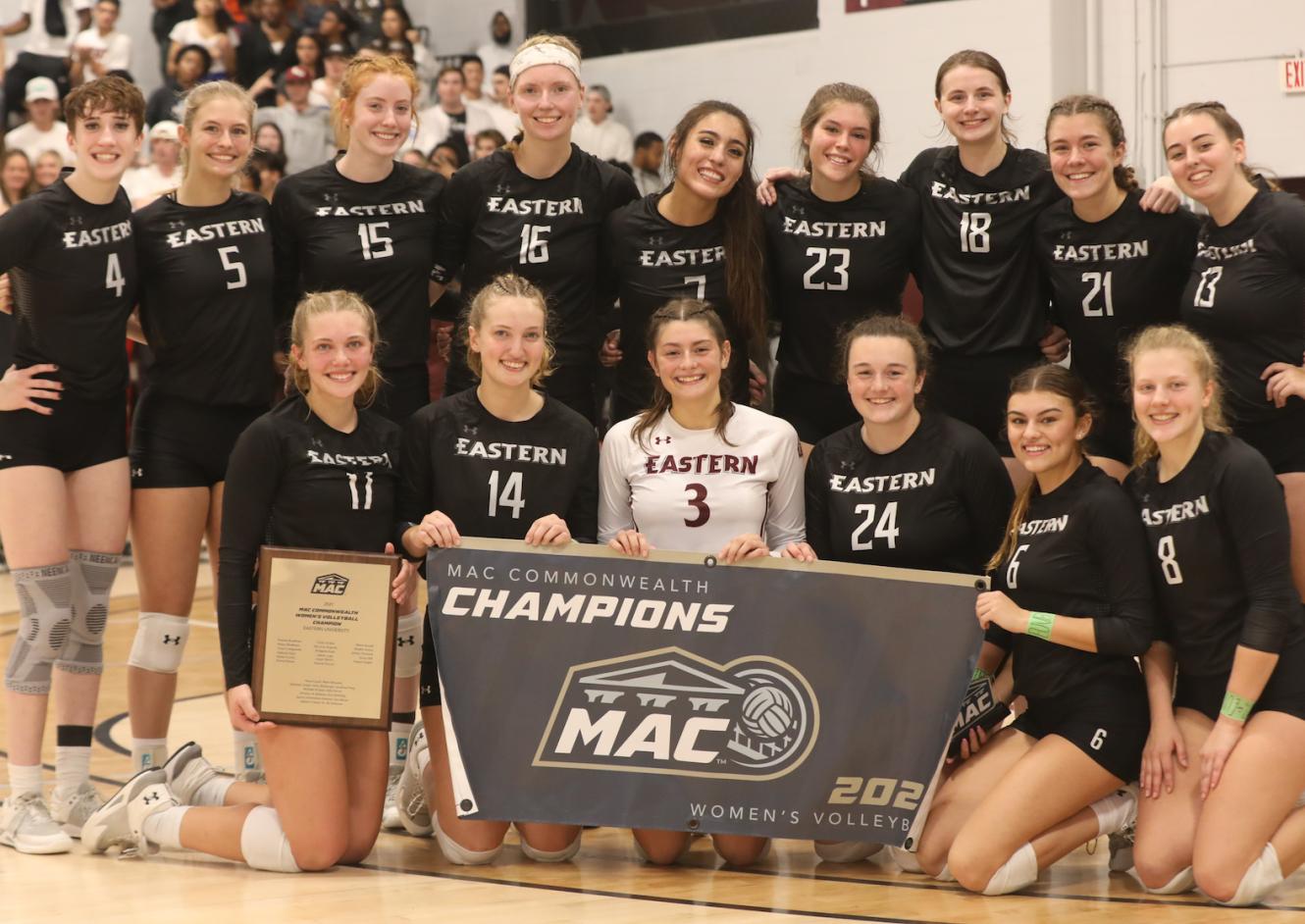 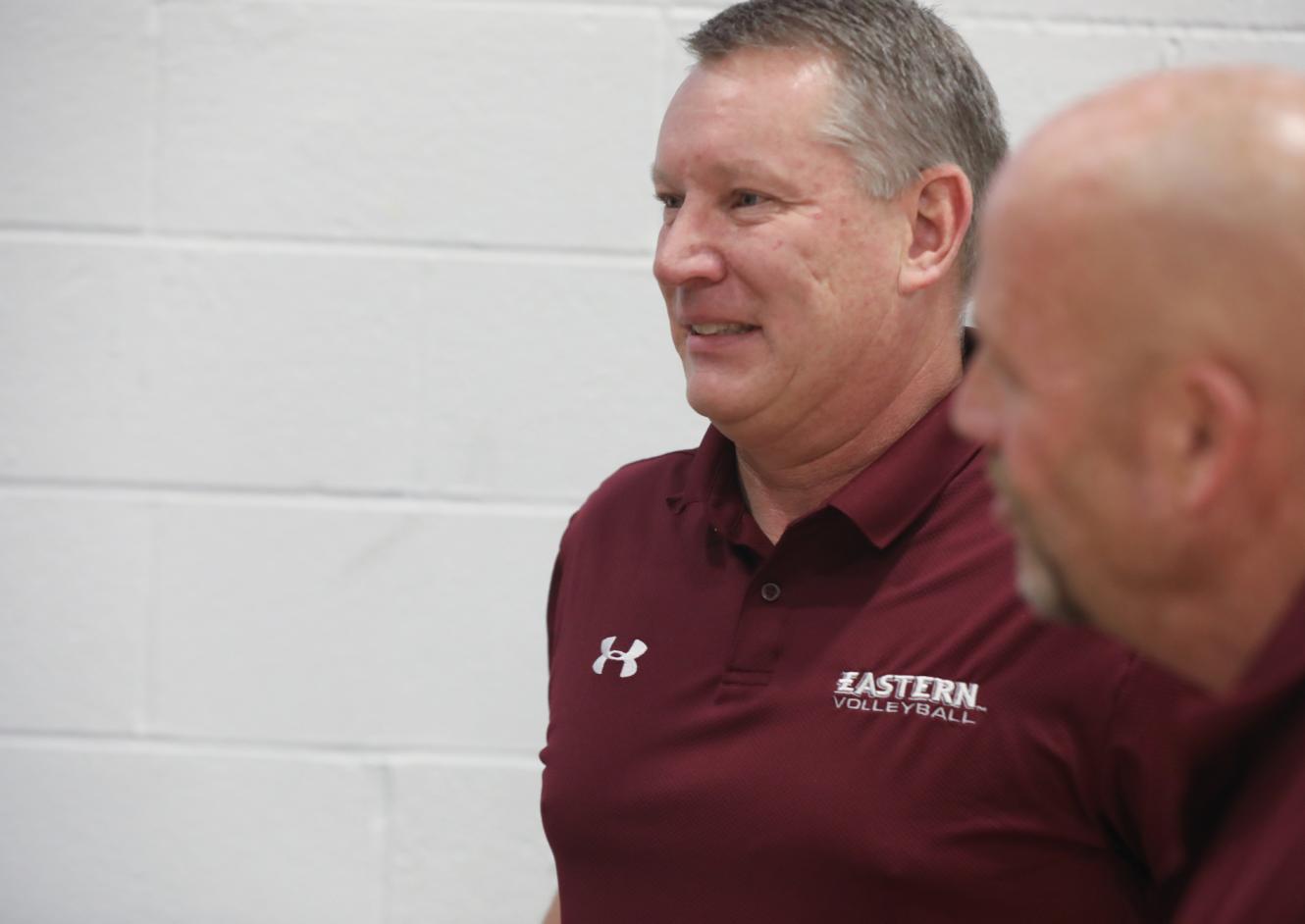 ST. DAVIDS, PA – It did not look like it was going to happen. For the first forty-five minutes of the 2022 MAC Commonwealth Women's Volleyball Championship, the top-seeded Eastern University Eagles could do nothing against an efficient Stevenson University attack. The Mustangs raced to a pair of lopsided set wins and put the Eagles' backs against the wall. After scoring just 26 points in the opening two sets, the Eagles reeled off three-consecutive wins to earn a second-straight MAC Commonwealth title and the league's bid to the NCAA Tournament.

The Eagles (23-5) trailed 9-7 in the fifth, but got the score back within their control after a sideout and a huge double-block from Hannah Pringle and Natalie Saxton with Viviana Fragoso at the service line.

After the teams traded sideouts, Elle Jiron-Bujanda served for three huge points to carry her side to match point. Kaylyn Zeigler had a huge kill for a 13-11 lead and Jiron-Bujanda dropped in an ace for the third.

The Mustangs earned a sideout to force an Eastern timeout. Out of the break, Fragoso put a pass right on her setter's hands and Kelly took a swing that missed the boundary by inches. Having fought off two match points, the Mustangs tried Fragoso again, and again the first-year was on point. Jiron-Bujanda went wide for Pringle. The rookie outside hitter delivered her 21st kill of the match for the win.

The start was very different than the finish.

Stevenson (25-5) pounded out 30 kills and kept the Eastern attack to minuscule hitting numbers through the first two sets. The Mustangs won the first set 25-16 and the second by an even more lopsided 25-12 win in the second. It was the first time this year, that the Eagles were held below 15 points in a 25-point set.

The Eagles came out with a different line-up for the third set, and it made a difference.

After trailing throughout the first two sets, the Eagles finally got a little momentum going when they scored with both Trinity Gruber and Bridgette Kelly at the service line. The Eastern lead grew to 9-4 and it seemed that the Stevenson attacks that were hitting the line or hitting the tape in the opening two sets were getting picked up by the Eastern defense.

While the momentum shifted a little, the third set was still a grind. Stevenson pulled to within a point at 14-13 before Kaylyn Zeigler came up with a big kill and Kelly followed that with an ace. Stevenson earned a sideout, but Natalie Saxton had an answer with a kill for a sideout and another kill for an 18-14 edge. Kelly pounded out the final two kills of the set for a 25-20 win.

With the win, the Eastern crowd came alive. The Eagles rode that energy to a stunning .386 hitting percentage with 20 kills in the fourth set. Even with the offense running at top efficiency, the Eagles held only a slim 19-17 lead when Fragoso checked back into the match to serve. The first-year from La Mirada, Calif. put the Mustangs on their heels with tough serves and Jiron-Bujanda moved the ball back and forth between Saxton and Pringle for four kills. Saxton, playing in her first match in three weeks, finished with 10 kills, two blocks, and a .429 hitting percentage. Kelly matched her fellow middle in kills but had an ace and eight blocks.

With a 23-17 cushion, the Eagles just needed to sideout to force a fifth set. They used consecutive kills from Pringle to win 25-19. The rookie outside hitter had eight of her match-high 21 kills in the fourth set.

Grace Casagrande led four Eastern players in double-figure digs with a match-high 21. The junior libero was 14-for-14 on serve receive and added five assists. Jiron-Bujanda had 45 assists and 13 digs and Zeigler had eight kills and 17 digs.

Shannon Baily had 15 kills, 19 digs, and five blocks and Rileigh Kimball had 14 kills and 12 digs to pace the Mustangs.

While the way the match stated might have been a surprise, the fifth set seemed nearly a given a few hours before game-time. Since Eastern joined the MAC Commonwealth in 2021, all four matches have between the Eagles and the former league-champion Mustangs have gone to five sets. Eastern has won all four fifth sets.

"We were not getting production early and we had to make some changes," he continued. "We have been plying well with the players that started the match, but we needed immediate production and the players that came in did a really good job. Viviana hit some huge serves for us and was super-steady down the stretch. She has not played like a freshman."

The Eagles will await word from the NCAA about the location and opponent for their next match.